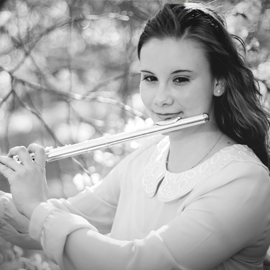 Flute and Piano located at The Perfect 5th

Education: Master of Music in Flute Performance at Temple University-Boyer College of Music,

Ashley Oros graduated with her Master of Music in Flute Performance at Temple University- Boyer College of Music in 2022. She earned her Bachelor of Music in Flute Performance also from Temple University under Mr. David Cramer, former Associate Principal Flute of the Philadelphia Orchestra, and Mrs. Prema Kesselman, former Principal Flute of the Santiago Philharmonic Orchestra. Her previous teachers include David DiGiacobbe, Jeff Zook, Amy Orsinger and Damian Barnett.

Before moving to the United States to attend college, Ashley performed with several Santiago, Chile area youth orchestras. She has performed solos and participated in festivals in the United States, France, Italy, Chile, Argentina and Brazil.

An enthusiastic and dedicated teacher, Ashley teaches privately in the Philadelphia, West Chester, Lancaster and surrounding areas. She is also on faculty as flute instructor and the Temple University Music Preparatory division. Ashley has been teaching flute since 2010 and has taught piano since 2018. She is an advocate of the Alexander Technique and incorporates it into her lessons. She loves learning from her students and watching them grow as they make music an important part of life.