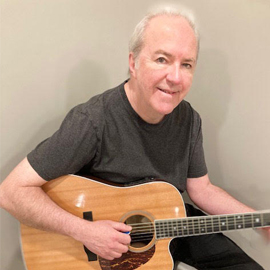 Skill Level: Beginner to Professionals, Ages 9 and up

Bill Nork began playing guitar professionally in a Country band in Lancaster while he was attending College at Millersville University. He has since played in Bluegrass and Classic Rock bands as well as writing and performing original music. For many years he worked as an accompanist for singer/songwriter Robert Bobby performing throughout Central PA and as a featured act at the North East Regional Folk Alliance Conference.

Bill has played in pit bands for over 70 musical theater productions at Allenberry Playhouse, Theater Harrisburg, Totem Pole Playhouse and many others.

After graduating from college with a BA degree in English, Bill began teaching guitar at Mark Sherman’s Home of Bluegrass in Harrisburg. He has since taught at Forte Music in Harrisburg and Campbell’s Music in York.

In his lessons Bill teaches the melodic and harmonic elements of guitar playing while incorporating basic music theory. He approaches each student individually and works to help them along their way no matter where they are in their musical path.

Examples of his playing and teaching can be found on his YouTube Channels Bill Nork Guitar Player and Bill Norks Approach to Guitar.